Experts believe that more people die from poisoning with carcinogenic gases as a result of rocket hits than from the hits themselves. 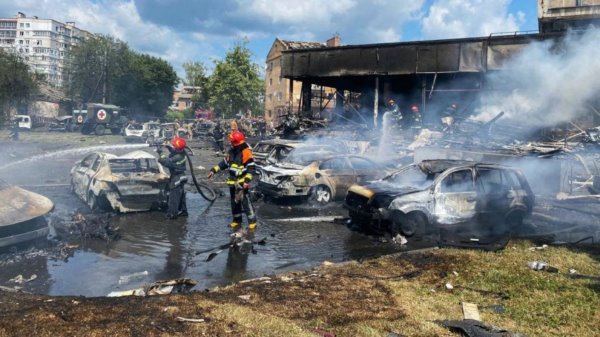 They told how to protect themselves from toxic emissions and what important aspects need to be taken into account during the post-war reconstruction.

Russian troops do not stop actively and massively shelling Ukrainian cities and destroying urban infrastructure, which will have consequences in the future

Urban warfare destroys residential buildings and the vital infrastructure that keeps cities functioning. This can lead to a lack of safe drinking water, electricity to power homes, businesses, and hospitals.

The Red Cross Report showed that during prolonged armed conflicts in cities, problems are largely caused by the dependence of large-scale interconnected infrastructures on the availability of qualified personnel to ensure the provision of services.

“During explosions, absolutely everything is destroyed. Once in the building, the shell throws fragments, destroying everything around. Not only residential infrastructure facilities suffer from the destruction of communications, but also strategic facilities that ensure life. Accordingly, there are situations with the supply of water, electricity, sewerage and everything else,” explained the chairman of the NGO Urban crew, Volunteer Vlad Samoylenko.

Damage to infrastructure can lead to the spread of infections, deterioration of the epidemiological situation in the city. In addition, trenches and explosions destroy green spaces that are important for air purification.

“The city becomes uninhabitable, and everyone runs away from it. When more than 50% of the critical infrastructure that provides water supply and sewerage carriers is destroyed, it is impossible to be in such cities,” Samoylenko said.

Impact of air pollution after fires

When missiles hit, toxic emissions are generated, which affect everyone who is near the place of impact and caused by a fire. Such damage can have a long-term effect and even lead to chemical poisoning.

So during a large — scale fire in the shopping center in Kremenchug, plastic burned, synthetic building materials melted, as a result, the air quality in the city seriously deteriorated-this conclusion was made by experts of the environmental community “clean air of Ukraine”.

The AirFreshMax air quality monitoring station in the village of Vlasovka, which is located 15 km from Kremenchug, recorded on June 27 a strong and sharp deterioration in air quality for at least 4 hours. There was an abnormal increase in combustion products – nitrogen dioxide, carbon monoxide, and partially ammonia.

The damage caused by rocket attacks and the resulting fires is enormous and is caused by a combination of many factors at once:

Large fires are accompanied by emissions of fine dust

“When the rocket attacks were in Kiev, public monitoring stations clearly recorded a sharp surge in the amount of such dust in the air for an hour or two,” said Maxim Soroka, an expert on environmental monitoring and measurement.

High concentrations of such dust cause diseases or lead to deaths, because such pollution negatively affects health even at very low concentrations.

This trend was noticed during fires in warehouses in Kiev. A large amount of organic matter and black carbon, as well as nitrogen dioxide, got into the air.

Soroka noted that during the tragedy in the shopping center in Kremenchug, many people suffered not so much from the defeat of the rocket itself, but so much from poisoning as a result of burning.

For insulation of buildings, dangerous expanded polystyrene was used, during the combustion of which a large amount of polycyclic compounds and prussic acid are released.

“Prussic acid is comparable in toxic properties to potassium cyanide. People are suffocating from the inside, ” Soroka said.

When a rocket causes a large fire, the person under the rubble loses the chance of escape due to lack of oxygen and poisoning by combustion products.

The risk occurs during and after a fire

Experts who monitor monitoring stations have noticed that when the Ashes dry up after a fire is extinguished, they turn into a secondary source of ash emissions, in particular toxic ones. Any wind will lift it up again and scatter it into the air.

The next two days after each fire, the air will be very polluted, and then the concentration of harmful substances will decrease for 3-4 days.

At this time, in order to protect yourself from the toxic effects of combustion products on the body, you must follow the following recommendations::

If you feel unwell, you should consult a doctor.

How to find out about the air condition

Information about the air condition in a particular city can be found on the websites of the Departments of ecology of regional state administrations.

You can also monitor the state of pollution by installing public monitoring posts that transmit information around the clock in real time, in particular EcoCity, Lun and SaveEcoBot.

The consequences of fighting in cities, in addition to destroying infrastructure, included hunger, malnutrition, poverty, infectious diseases, poor hygiene, pests, and overexploitation of local natural resources. In some cities, hunting and gathering have become important. Sometimes residents had to move to the countryside to be able to find or grow food. The military urbanization of rural areas and the farming of cities allowed nature to gradually take over cities.

The destruction of cities in some cases after World War II led to environmental progress.

Samoylenko believes that in order to create an environmentally sustainable city, as well as make it safe for residents, it is necessary to build houses, roads, and any infrastructure from those materials that emit less toxic substances.

After all, even in peacetime, a balcony covered with plastic clapboard or a facade made of plastic elements emits dangerous elements when heated. Therefore, it is better to give preference to natural materials, as well as brick and concrete. It is also necessary to increase the number of green spaces, because they can save a person from shrapnel and become a shelter.

Another important point is the arrangement of bomb shelters and their maintenance in proper condition. Now many residential buildings are being built even without car parks.

Aviation causes warming not only because of CO2 emissions