Astrophysicists have discovered an unusual weak radio emission spreading over tens of thousands of light-years in the parent galaxy of quasars 3C 273, one of the closest to our galaxy. The discovery is reported by the Atacama Large Millimeter Array (ALMA) Observatory. 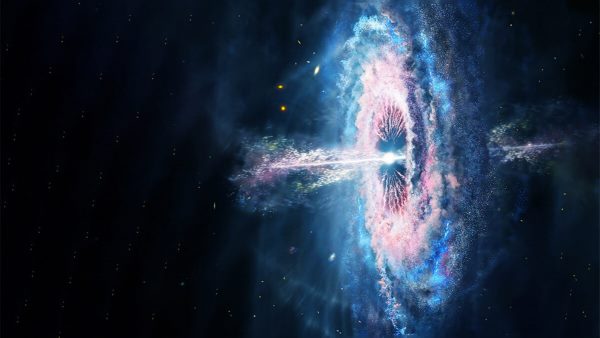 3C 273 is one of the closest and best studied quasars. This object, located at a distance of about 2.4 billion light-years from Earth in the constellation Virgo, became the first quasar discovered back in 1963. Despite the fact that much is known about the quasar itself, until now scientists have not been able to study in detail the parent galaxy of this black hole.

In a paper published in The Astrophysical Journal, Japanese astrophysicists talk about a new technology using which scientists managed to look inside the system and detect previously unknown radio emission.

A quasar is the core of a galaxy, in the center of which there is a massive black hole that absorbs the material surrounding it, emitting huge radiation. Its brightness, as scientists note, overshadows objects that are nearby and interferes with their observation.

3C 273. On the left is the Hubble image, a high—energy jet is visible in the lower corner, on the right is the observation of ALMA radio emission (blue-white area surrounding the center of the hole) and jet (orange area). Source: ALMA

Thanks to the new observation technology, scientists have detected a weak radio emission extending tens of thousands of light-years above the parent galaxy 3C 273. The researchers note that waves in the radio range around quasars are usually associated with synchrotron radiation from high-energy events, such as starbursts or ultrafast jets emanating from a black hole.

Such radiation is characterized by a change in brightness depending on the frequency of observations. But the new discovery does not meet this principle — the weak radio emission detected by astrophysicists has the same brightness at all studied frequencies.

In their work, scientists have shown that the radio emission found comes from hydrogen gas in the galaxy, which is affected by the nucleus 3C273. This gas is an important component for the creation of stars, but under the influence of intense quasar radiation, hydrogen is ionized, preventing star formation.

Astrophysicists note that for a long time it remained a mystery whether the radiation of a quasar could be powerful enough to deprive a galaxy of the ability to form stars. Analysis of the radio emission found shows that at least 7% of the light from 3C 273 is absorbed by hydrogen in the host galaxy, creating an ionized gas whose mass is 10-100 billion times the mass of the Sun. However, taking into account the overall estimate of the amount of gas in the system, scientists believe that there remains enough of it to continue star formation.

This discovery provides a new way to study problems that were previously solved with the help of observations in optical light. By applying the same technique to other quasars, we hope to understand how the galaxy develops through interaction with the central core.

Shinya Komugi, Associate Professor at Kogakuin University and lead author of the study