Using data obtained by the VLA radio telescope, the researchers discovered a young and very powerful pulsar at a distance of 395 million light-years from Earth. 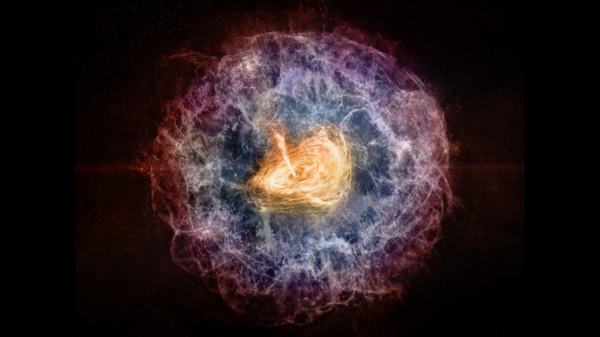 The researchers analyzed data from the “Sky Survey” performed by the VLA radio telescope and discovered one of the youngest known neutron stars — the superdense remnant of a massive star that exploded as a supernova.

The object, named VT 1137-0337, is located in a dwarf galaxy 395 million light-years from Earth. It first appeared in an image taken by the telescope in January 2018, and remained visible in all subsequent images. The study showed that the bright radio emission, powered by the magnetic field of a rotating pulsar, only recently arose due to the dense shell of the debris of a supernova explosion.

Judging by its characteristics, it is a very young pulsar — perhaps it is only 14 years old, but not older than 60-80 years.

Gregg Hallinan, researcher at the California Institute of Technology

Studying the characteristics of VT 1137-0337, astronomers have considered several possible explanations, including a supernova, a gamma-ray burst, or tidal disruption, in which a star is torn apart by a supermassive black hole. They concluded that the best explanation is the pulsar wind nebula or plerion.

The supposed evolution of the star. Source: Melissa Weiss, NRAO/AUI/NSF

The pulsar wind consists of charged particles accelerated to relativistic speeds by the rapid rotation of the super-strong magnetic field of the rotating pulsar. In this scenario, a star much more massive than the Sun exploded as a supernova, leaving behind a neutron star.

Most of the star’s original mass was ejected outward as a shell of debris. A neutron star rotates rapidly, and as its powerful magnetic field penetrates the surrounding space, it accelerates charged particles, causing strong radio emission.

An example of a plerion is a Crab nebula formed as a result of a supernova explosion in 1054. The researchers note that the object they found is about 10 thousand. It is much more energetic than the Crab Nebula, and it has a stronger magnetic field.