The tropical plant mimosa prudish (Mimosa pudica) continues to pose new questions to scientists. Recently, it turned out that it can distinguish living beings from inanimate objects.

This perennial herbaceous plant with a height of 30 to 150 cm comes from the tropical regions of South America, where it is considered a weed; at the same time, it is cultivated all over the world as an ornamental. Mimosa blooms from May to September with small purple inflorescences in the form of balls, which are located on long peduncles. Pollination occurs with the help of wind or insects, after flowering, hook-shaped curved beans are formed.

A distinctive feature of the shy mimosa is its reaction to a potential threat. When the roots are damaged, the plant secretes a “cocktail” of toxic substances, including methanesulfonic, lactic, pyruvic acids and various sulfur compounds; this often leads to poisoning of livestock on pastures.

Another amazing property that gave the plant its name was its ability to fold leaves in response to touch. The mechanism of this action is known to scientists. Water membranes are located at the base of the petioles, and sensory areas on the leaflets react to pressure. When touched, the water rushes to the point of contact, and under this weight the leaves curl up and fall down. 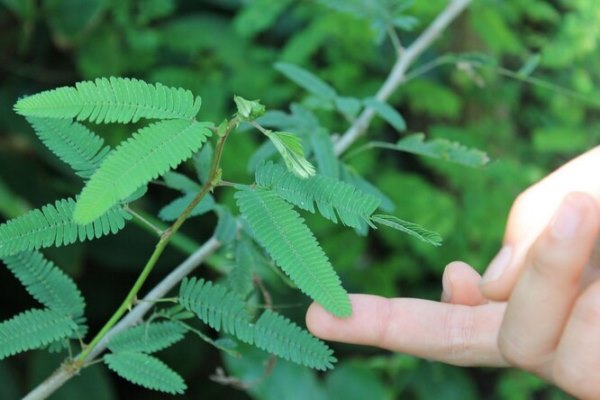 Recently, Australian scientists have discovered that the shy mimosa is capable of self-learning. According to the results of a study published in the journal Oecologia in 2016, mimosa “remembers” the features of each contact, and if it does not pose a threat, it will not waste energy on folding leaves. This behavior is characteristic of animals: with the help of the nervous system, they not only receive information, but can also use it in the future. The behavioral reaction of the plant, taking into account the accumulated data, was described for the first time in this example. The new study was conducted by specialists from the State University of New York at Albany. They learned that the shy mimosa distinguishes her potential enemy well. During the experiments, it was found that in cases when a person touched its roots, the air was filled with a mixture of hydrogen sulfide and other substances, while contact with metal, glass and other objects did not trigger the mechanism of developing “chemical protection”.

As a result, biologists have found another conceptual difference between the shy mimosa and other representatives of the fauna: if most plants that use poison for their protection secrete it from their aboveground part, then the object of their study does this with the help of their roots, on which tiny nodules are located. Moreover, they not only produce poison, but also analyze the chemical composition of the environment, “making a decision” about the potential danger.