The results of the observation campaign, published on the preprint’s website arXiv.org , give important information about the stellar population of this galaxy. 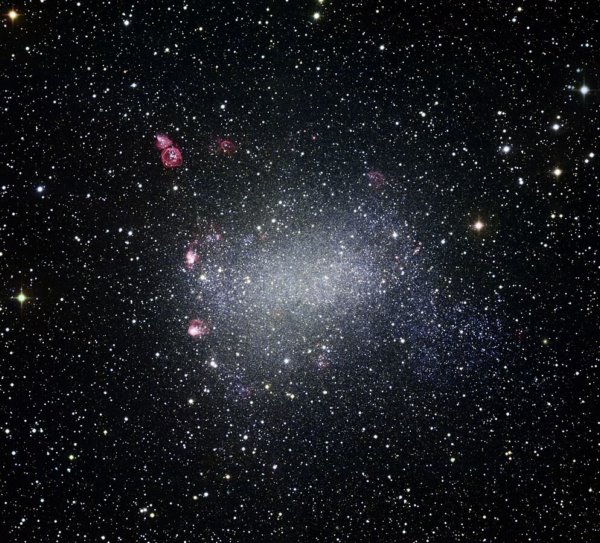 The Barnard galaxy (NGC 6822) is located at a distance of about 1.63 million light-years from Earth, by astronomical standards it is very close. However, it is located outside the virial radius of the Milky Way. NGC 6822 is known locally as a dwarf irregular galaxy. Its diameter is about 7000 light-years and contains a spatially extended system of globular clusters (SHS).

NGC 6822 can be observed from both the northern and southern hemispheres. And the close distance allows you to conduct many multi-band studies in the range from optical to near infrared (NIR) and middle infrared (MIR). Moreover, its chemical composition and apparent isolation make NGC 6822 a very interesting laboratory for studying stellar pulsation and evolution.

A group of astronomers led by Maria Tantalo from the Tor Vergata University of Rome in Italy conducted accurate multi-band photometry of NGC 6822 using the Hyper-Suprime-Cam (HSC) camera on the Maunakea Subaru telescope. The HSC data set was supplemented with multi-channel images obtained using the MegaPrime wide-angle camera on the Canada-France-Hawaii Telescope (CFHT), from the Dark energy Camera (DECam) on the Blanco Telescope at the Cerro Tololo Inter-American Observatory (CTIO) and the wide-angle camera (WFC) installed on the Isaac Newton Telescope (INT) in La Palma.

“This is the first article in a series dedicated to studying the stellar composition of NGC 6822 using the advantages of optical photometry collected using wide—angle image formers available on class 4-8 m telescopes,” the researchers wrote.

As a result, the scientists obtained a data set that covers an area of two square degrees in the center of NGC 6822 with three different photometric bands. In total, scientists have performed about 40 million measurements of objects across the entire field of view. The final catalog includes more than 1 million stars with at least one measurement in two different photometric ranges.

It turned out that young, intermediate and old stars in NGC 6822 show different radial distributions. The old stellar population is distributed spherically and extends over longer radial distances than previously assumed (about 1 degree). As for the young population, it is distinguished by a clearly defined band and a disc-shaped distribution, shifted from the center. This is compared to the old population.

In addition, the study showed that the carbon-rich stars in NGC 6822 are more concentrated in the center, and their structural parameters are similar to both young and old stellar tracers.

Recall that irregular galaxies are irregularly shaped galaxies that do not fit into the Hubble sequence. They have neither a spiral nor an elliptical structure. Most often, such galaxies have a chaotic shape without a pronounced core and spiral branches.