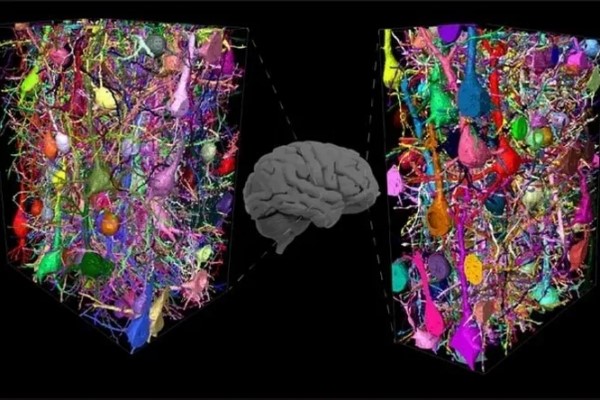 Moritz Helmstaedter, Director of the research center. Institute of Brain Research named after Max Planck (Frankfurt), who led a new study published in the journal Science, talks about the obvious difference between the human brain and the mouse brain: “First of all, our brain contains 1000 times more nerve cells, which allows us to play chess and write children’s books, which mice, apparently, do not know how to do.” But the size still doesn’t explain much. At the very least, the mechanisms that allow a person to play chess, and which the mouse does not, remain unclear.

Analyzing neural networks in mice and humans, scientists have compiled a complete map of their connectomes, that is, interneuronal connections. What they saw is worthy of surprise: they found a new type of neural network in the human cortex, which is practically absent in mice. It is a neural network that relies on numerous connections between inhibitory insertion neurons (or interneurons).

What kind of neurons are there

All neurons can be roughly divided into two types — neurons that interact with the external environment, for example, sensory or motor neurons, and neurons that interact only with other neurons, that is, perform internal work. Such neurons are called insertion or interneurons. Insertion neurons are also of two types – excitatory and inhibitory. Excitators usually throw the neurotransmitter glutamate into the synaptic cleft — and then the neuron that glutamate receives is excited and ready to transmit the signal further along the neural network. Inhibitory neurons usually throw out the GABA neurotransmitter, and then the neuron that receives it “goes out” and does not transmit anything further. So there were incomparably more inhibitory neurons in the human brain than in the mouse brain (relative to the total number). But there are about the same number of active neurons working with the external environment in both mice and humans (also relative to the total number). It turns out that a person is some kind of complete brake! The brain seems to deliberately slow down a person’s reactions to external stimuli.

Why does a person need a “neurothormosis”?

Helmstaedter explains the work of inhibitory interneurons in this way: “They behave in a very peculiar way. They are very active, but not to activate other neurons, but to silence them. They are like kindergarten teachers or museum guards: their very time-consuming and energy-consuming activity is to keep others from getting excited. Now imagine a room full of museum guards who are gagging each other. That’s what the human brain has developed!”

Why is this necessary? There is a theory that such inhibitory networks can extend the time during which recent events are stored in working memory before they are forgotten or sent for storage in long-term memory, a kind of hard drive of our brain. Helmstaedter believes that a longer-term working memory helps to cope with more complex tasks and expands the ability to reason. But this is only one of the assumptions.

The scientist also draws attention to such moments: “It can also be a consequence of pathological changes, and it needs to be studied in the context of neuropsychiatric disorders. Last but not least, none of today’s major artificial intelligence methods use such interneuronal networks.”