Researchers from the New Jersey Institute of Technology have identified a solar flare region in which charged particles accelerate to near-light speed. The study is published in the journal Nature. 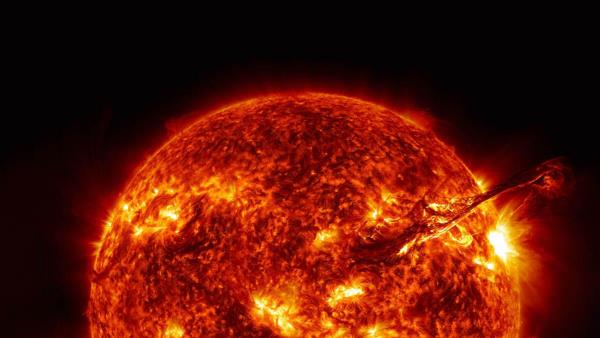 The researchers used data from the Expanded Owens Valley Solar Array (EOVSA) radio telescope to observe solar flares and discovered a highly efficient particle accelerator located at the top of the brightest eruption point in the solar corona.

The size of the region in which the acceleration of charged particles occurs exceeds the volume of the Earth. Scientists note that at this point the surrounding plasma of the explosion is converted into high-energy electrons.

Astrophysicists used the capabilities of EOVSA microwave imaging to measure the energy spectrum of electrons in hundreds of locations of an X-class solar flare caused by a change in the configuration of force lines along the surface of the Sun on September 10, 2017.

The EOVSA spectral images gave us an exhaustive map of the thermal plasma of the flare that was developing every second. But, to our surprise, we found a mysterious “hole” in the plasma heat map, which began to form at the peak of the flare.

Gelu Nita, Research Professor at the New Jersey Institute of Technology and co-author of the article

The researchers found that this region is densely filled with non-thermal high-energy particles. The analysis showed an effective process of energy conversion in the solar flare particle accelerator: the intense energy of the Sun’s magnetic fields is quickly released and converted into kinetic energy in the “accelerator” region.

Using data on solar extreme ultraviolet radiation, scientists have confirmed that there are practically no particles with thermal energies below several million kelvins left inside the region, which is consistent with the EOVSA measurement, according to which all particles were accelerated to non-thermal energies of more than 20 keV or almost 100 million K.

Solar flare in the thermal (left) and ultraviolet (right) ranges. The concentration area of accelerated electrons is highlighted in blue.

Astrophysicists believe that the results of this work will help scientists answer fundamental questions of elementary particle physics that cannot be solved in experiments on Earth, as well as to re-evaluate the impact on our planet of high-energy particles from future solar flares.