They say that nerve cells do not regenerate. As already known, this is not the case. Moreover, new brain cells grow in us all our lives. And this picture, obtained during experiments on mice, is the first image of new neurons in a living brain. 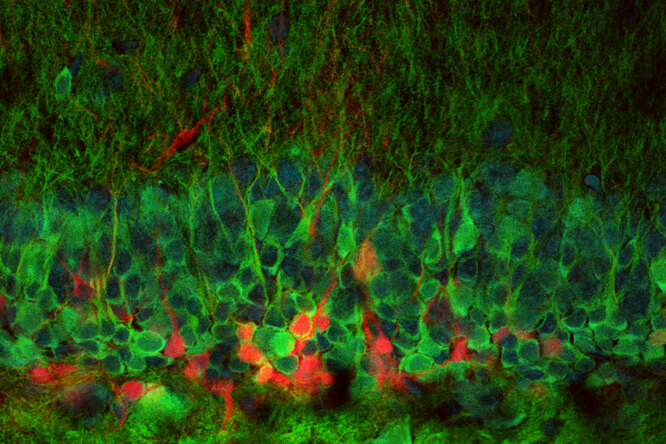 We quite often think that we are born with a fully formed brain, but recent research suggests that the number of neurons in the brain is constantly growing. New neurons mainly appear in the hippocampus, the part of the brain that is responsible for learning and memorization.

We’ve never seen them grow, but in 2016, researchers at Columbia University Medical Center implanted a tiny microscope into the brains of live mice to record this process. In the picture you can see how the new neurons glow red.

With the help of a series of experiments, during which scientists managed to deactivate new brain cells using optogenetic means, focused light, biologists found out that newly appeared neurons are responsible for processing memories, allowing animals to distinguish new memories from each other. Scientists believe that their discovery may in the future contribute to the treatment of depression and schizophrenia.

The possibilities of optogenetics are still being explored, but they are already leading to amazing results.