Researchers from the Massachusetts Institute of Technology have studied in detail the brain’s response to unexpected events, the mechanism of decision-making, as well as how a sense of surprise helps in learning and what role norepinephrine plays in all this.

Most of the norepinephrine in the brain is produced by two nuclei of the blue spot (one in each hemisphere). Neurons of the blue spot are marked with a green fluorescent protein / © Gabi Drummond

Norepinephrine (or norepinephrine) is one of the main neuromodulators that affects neurons in many areas of the brain, but is produced mainly deep in its bowels, in the cells of the blue spot (areas of bluish color in the brain stem). It is involved in a variety of brain functions, including arousal, increased alertness, memory, learning, and anxiety. Dysfunction of the blue spot, degeneration of the norepinephrine production or recognition system are considered signs of neurodegenerative diseases such as Alzheimer’s, Parkinson’s and Huntington’s diseases.

In a new study, a team from the Massachusetts Institute of Technology (USA) decided to study the role of the blue spot in a specific type of learning — reinforcement learning, or trial and error. To do this, the authors trained mice to press a lever when they heard a high-frequency beep, and do nothing in the case of a low-frequency signal. When rodents reacted correctly to a high-frequency signal, they received water, but if they pressed the lever when they heard a low-frequency sound, they received an unpleasant trickle of air.

In addition, the animals were trained to push the lever harder and more decisively (in fact, faster) when high-frequency sounds became louder. When their signal volume was lower, the mice were less sure whether they should press or not, which was reflected in an increase in decision-making time.

To test the role of the blue spot in learning and decision-making, the researchers suppressed its activity in trained individuals. As a result, the period of time required to decide to press the lever in such mice increased significantly.

This suggests that the release of norepinephrine by the blue spot helps to take a risk to get a reward, even in situations where a win is not guaranteed. The researchers also found that the neurons that generate this norepinephrine signal appear to send most of the neuromodulator to the motor cortex to stimulate the animal to action. 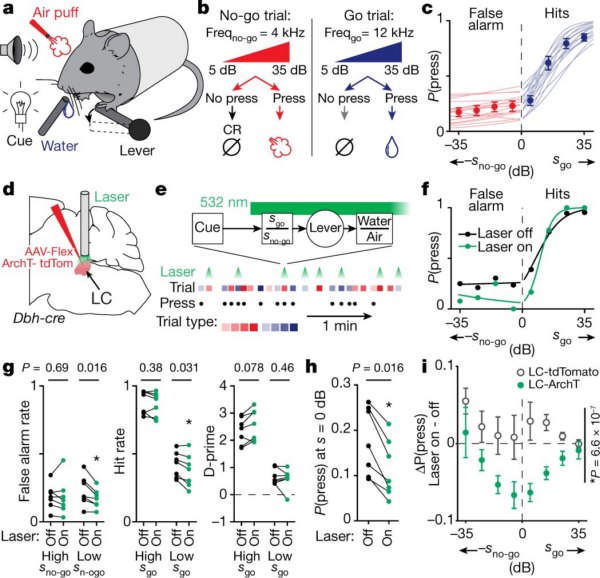 Although the initial surge in norepinephrine production seems to stimulate mice to action, scientists have found that there is often a second surge that occurs after the completion of training and testing. When the subjects received the expected reward at the end, these bursts were small. However, when the result was unexpected (for example, if the mouse received an unpleasant trickle of air instead of the expected well-deserved reward), the spikes in neuromodulator production turned out to be much larger.

“In subsequent trials, such a mouse is much less likely to press the lever if it is not sure that it will receive a reward. The animal constantly corrects its behavior,” explained Professor of neuroscience in the Department of Brain and Cognitive Functions at the Massachusetts Institute of Technology and the main author of the study, Mriganka Sur. “Although the mouse has already learned the task, it adjusts its behavior depending on what it has just done.”

The subjects also showed spikes in norepinephrine production in trials when they received unexpected rewards. These bursts apparently spread norepinephrine to many parts of the brain, including the prefrontal cortex, responsible for planning complex behavior, decision-making, and other higher cognitive functions. Such a reaction to unexpected events made it possible to adjust the learning outcomes and better perform the task at subsequent stages of the study.

In the future, the authors plan to study the possible interaction of norepinephrine with other neuromodulators, especially dopamine, which is also known to respond to unexpected rewards. In addition, scientists hope to learn more about how the prefrontal cortex stores information about signals from the blue spot to help animals improve their results in future trials.

An article with the results of the study was published in the journal Nature.

Experiments have pointed to the autoimmune nature of schizophrenia

Experiments have pointed to the autoimmune nature of schizophrenia