The XMM-Newton space Telescope took an X-ray image of the Manatee nebula. At a distance of about 100 light-years from the central microquasar, the researchers found a region of particle acceleration.

Astrophysicists from the European Space Agency have found a region of particle acceleration in the images of the Manatee nebula. The X-ray jet begins about 100 light-years from the microquasar at the center of the nebula and extends for 300 light-years.

The researchers note that high-energy particles in the nebula were first detected in 2018 by the HAWC Observatory (a High-altitude experiment to search for Cherenkov Radiation). Astrophysicists then recorded a stream of high-energy gamma radiation, but could not pinpoint its source.

After studying the new data, scientists have suggested that the particles accelerate to very high energies in the “head” of the manatee through an unusually energetic process of particle acceleration. The flux emitted by the black hole reaches this region and is re-charged due to shock waves in expanding gas clouds and enhanced magnetic fields, the researchers believe. 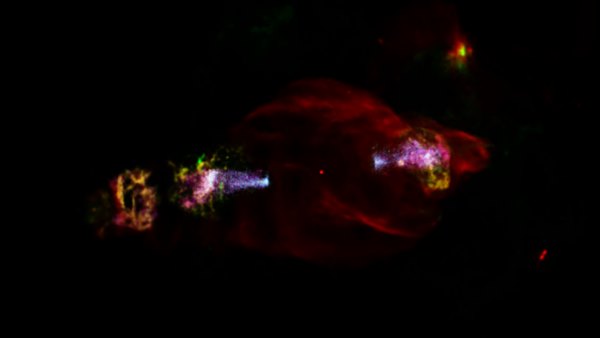 Researchers believe that the Manatee nebula, located at a distance of 18 thousand light-years from Earth, was formed as a result of a supernova explosion about 30 thousand years ago. This is one of the largest observable objects of this type: it occupies an area in the sky comparable to four full moons.

Manatee is unusual in that after a supernova explosion, a black hole remained in its center. This “microquasar” SS 433 emits powerful streams of particles moving at a speed close to a quarter of the speed of light, which penetrate gas shells, creating a shape with two lobes.

Researchers will continue to study the nebula. The relative proximity of this space object makes it possible to use it as a laboratory for observing astrophysical phenomena.